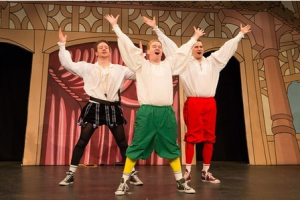 Continuing the theme of borrowing creative insights from other worlds, on Sunday we went to watch the hilarious Reduced Shakespeare Company’s ‘The complete works of William Shakespeare – abridged’.    The premise of the show, which has been around in various formats since the eighties, is to present abridged versions of all Shakespeare’s plays in just 97 minutes.   And of course to do so an entertaining way.    It was a fantastically funny show, performed by just three very talented actors using comedy, songs, slapstick and audience participation to summarise the plots and main characters of every one of the Bard’s plays.   The previous day I took my daughter on a tour of the CBBC studios in Media City in Salford.   We saw the set and props of Horrible Histories – the hugely successful series designed to teach children about history through comedy sketches … and lots of poo and puke jokes.

I mention these two experiences because they are superb examples of using humour to engage and educate.  Strip out the theatrical context of the Reduced Shakespeare show and you have the concept of communicating a complex and detailed topic in an abridged form in a way that’s engaging.   Strip out the production side of Horrible Histories and you have a sure-fire method of engaging a very discerning audience with a subject matter they wouldn’t otherwise show an interest in.   These are issues we communicators struggle with every day.   So what can we learn from the world of entertainment?    I love the idea of abridging a company strategy or business update and turning it into a ‘performance’, with humour and interaction.    I love the idea of selling it as a serious presentation but with the word ‘abridged’ splashed across the title to draw the audience in.   I love the idea of communicating serious messages through sketches and satire.    In short, I love the idea of turning serious business information into comedy.   Very few organisations are prepared to do this.    The leap of faith is too wide for some to contemplate.

Of course, in global companies, humour is notoriously difficult to get right, but in a local context it can be so powerful.   We all like a good laugh and I so wish more companies would see the funny side of business.   Laughter brings out the best in people and it’s a proven method of getting messages to stick.    A whole generation of children in the UK know about the (Terrible) Tudors, (Vicious) Vikings and (Ruthless) Romans because of Horrible Histories.    I’m off to see a heavy production of Hamlet at the RSC in Stratford on Saturday but I already know the plot thanks to the side-splitting abridged version I saw on Sunday.   The message has stuck.   I’m engaged and I have fond memories of how I was engaged.   Isn’t that what we want from our communications?   Try it out.  Reduce your strategy.  Abridge your operating model.  And have a damn good laugh about it.

PS – If you’ve successfully used humour to communicate a serious message, let me know about it and maybe we could feature your case study here on Creative Communicator.