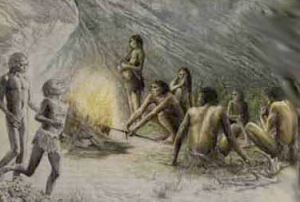 If the whole of human history was compressed into a single 24 hour day, the ‘old media’ we know and love, like books, TV, telephone and radio, would appear at about two minutes to midnight.   The internet and ‘new media’ would’ve flashed before us in the final seconds.    Even writing and language would only show up around mid-afternoon.   Communication, however, would be the old man of the day –  grey haired and not running for buses like the old days but still very much alive.    Collaboration too, whilst a popular corporate buzzword in 2013, is a concept as old as time.   When our ancestors gathered around campfires in the Serengeti all those millions of years ago, they pioneered the art of what we now call social networking.  As well as tools and resources, they exchanged ideas, myths, stories, fears and jokes.  They ‘friended’ other tribes, traded with them and formed alliances.   They engaged in common endeavours and innovated rapidly.    Life hasn’t really changed all that much has it?

In the final chapter of his excellent book The Self Illusion, scientist Bruce Hood looks at the impact of the internet on our sense of ‘self’.  He highlights examples of lonely, overweight and socially inept individuals living on benefits in bedsits who transform themselves into perfect, healthy, exotic body builders in the online virtual world, Second Life to escape their mundane lives.    This ability to project a different ‘self’ over the internet is both fascinating and of course dangerous.   Dr Hood asks other questions about the impact of the web – and social networking in particular – on our identity.   Is the amount of information at our fingertips on the internet, and our ability to make instant contact with almost anyone on the planet, compromising who we are?    The rather unphilosophical conclusion is no, not really.  If anything, social media is just returning us to where we began – the collaborative campfire.   You see, the point is that the communication tools we have come to rely on in the last few centuries have largely been one-way – books, phones, TV etc.   The Self Illusion quotes TED producer June Cohen in saying that the internet is returning us to a period of human development when communication was truly interactive, decentralised and collaborative, only this time there are no physical boundaries on the number of people who can fit round the campfire.

The human brain also has a point to make.   Although in theory we can become friends with half the world’s population if we were so inclined, the figures suggest that we stop at around 130 (the average number of friends a user will have on Facebook).   A recent survey of the tweets of more than 1.7 million Twitter users found that, as the number of followers increases, the capacity to interact with others start to decline.   It’s called the ‘economy of attention’.   We just can’t have meaningful interactions with millions of people.  We don’t have the time.  Again, the average number of followers one person can realistically interact with is around 130.   The brain has its way of saying enough is enough.   Write down the number of people you know at work and outside work who you genuinely interact with on a regular basis and I bet you won’t have many more than 130, if you even reach three figures.   I have 260+ connections on LinkedIn but I can’t claim to ‘know’ all but a fraction of them in a meaningful way.    I’m not on Facebook, a crime I have already confessed to.

So when all is said and done.   When all the ‘likes’ are added up, the fact remains that we are still essentially human.   Our craving for interaction and collaboration hasn’t diminished for millions of years.   And to be honest, it hasn’t really increased either.   The opportunity and ability has, that’s for sure, but when it comes down to it, we still prefer to feel the warmth of the campfire on our toes.